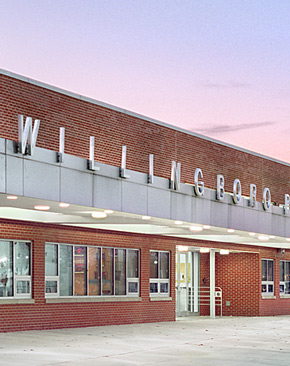 
Did you know?Benjamin Franklin’s son, William, a participant in his father’s famous lightning experiment and the last royal governor of New Jersey had a country home at what is now the intersection of Beverly Rancocas Road and John F Kennedy Way in present-day Willingboro.

Willingboro, NJ is one of three original Levittowns in America (the others being in New York and Pennsylvania). Until its failure and abandonment in 1990, the project site, developed as Willingboro Plaza in 1959, provided the main retail/commercial tax base for the residential population of 33,000. The sustainable design of the Library recognizes its role as ‘first on site’ in an abandoned area with a troubled history and made the Library needed a visible banner for the new civic heart of the site. The Public Library conserves 100% of the structural steel frame and concrete foundations of the original Woolworths building. The roof incorporates multiple clerestories and major skylights, creating a criss-cross infill of existing beams and joists which achieve 95% diffuse light with transitory “dappled light” effects. Although built for a market-rate $169/sf, the rigorous energy modeling and whole system integration delivers powerful performance metrics: Peak Electrical Demand Reduction = 57%, Global Warming (CO2) Reduction = 44% and Energy Savings = 46%.